THE CHURCH OF ST PETER-IN-ELY 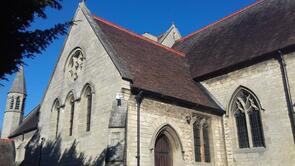 Interesting times
St Peter's remained part of the Ely Team Ministry until 2013 when, in an Interregnum, the Bishop took action and arranged for the care of St Peter's to be transferred to the Dean and Chapter of Ely Cathedral. However, after five years, this arrangement came to an end.

As we moved into 2019, the Trustees of St Peter sought to appoint and finance, with the support of the Bishop of Ely through his Archdeacon or other nominated delegate, a part-time stipendiary Priest to be directly responsible for St Peter's. and in June 2019, the Revd Canon Dr Paul Andrews was licensed by the Archdeacon of Huntingdon and Wisbech, the Venerable Hugh McCurdy, as Priest-in-Charge of St Peter-in-Ely. Photographs

The congregation has been growing encouragingly in recent years. A fair proportion live very locally within the city of Ely whilst others travel in from outlying villages. It is a very diverse group of individuals from a variety backgrounds; some members still feel unable in all conscience to accept the ministry of women as celebrants at the Eucharist whilst our newcomers tend to be untroubled by this issue. Typically, they have all come to St Peter's searching for a special something which they may have found lacking elsewhere.

After long decline, Ely's riverside area has at last been recognised as having many advantages as a place to live: the beauty of the walks along the river and into town has no equal for many miles around and the proximity of the neighbourhood to the railway station is a huge attraction for anyone needing to travel regularly to Cambridge, London or further afield. Pollution from the old Gas Works no longer blights the area, industrial enterprises have been encouraged to move further from the centre of Ely and more recent redevelopment has, as a matter of policy, included much new house-building on brown-field sites near the riverside. Slum-clearance by demolition has been replaced by the restoration of old properties into desirable residences and the provision of a new public park where there was once a timber-yard. The city of Ely is growing rapidly and the population figures of St Peter's original catchment-area have now possibly returned to something like those of the late nineteenth century.

St Peter's is now a well maintained church with a firm, financial foundation and St Peter's Rooms, established in the house next door which was purchased thanks to Mrs Lisney's legacy, are a great asset to the local community. The church has also become known as a popular venue for literary evenings and concerts.

​As we look to the future, we hope and pray that “God's will be done” in this place.
Back to History Page
Fr Paul Andrews
01353 656941
priest@elystpeterschurch.co.uk